Ana Ruby M. Paez was the Chairperson of the Teacher Education Department of the University of Santo Tomas (AY 2014-2015; 2015-2016). She likewise served as a Coordinator for Biological and General Sciences (2006-2009), Supervising Teacher for Student Teachers specializing in Science at the UST-EHS (from 2001-2008), Member of the College Textbook and Learning Committee (2003-2004), and chair of various committee works in the college. She also worked as a Research Assistant of the UST Graduate School’s Natural Science Laboratory from 1999-2000.

Prior to being a College Professor, she has eight years of experience teaching science subjects in High School, and actively served as a class and club adviser at Sta. Isabel College (Manila) Basic Education Department from 1993 to 2001, where she also held various positions as Assistant Principal (October 2001), Principal Council’s Secretary (2001), Science Area Chairperson, Grade Level Moderator (1995-1998), Vice President of the Faculty Club (1998-1999), Cooperating Teacher of student teachers from DLSU (Manila) and Chair of the S.I.C. PAASCU Team. 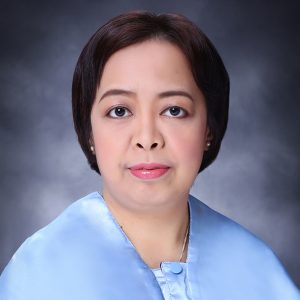