The Thomasian identity is rooted in Catholic faith. This section presents the Catholic faith and inspiration that the University of Santo Tomas leans on—the Virgin Mary, the saints and martyrs, the Pope, the clergy, as well as the modern-day Christians who try every day to follow in the footsteps of Jesus Christ.

The rich history of the Catholic Church and the Order of Preachers have blessed the Dominican family, particularly the University of Santo Tomas, with a wellspring of inspiration in the form of men and women, saints and martyrs, whose lives of faith, are worthy of emulation. Some of these saints and martyrs hold a special place in the hearts of Thomasians, who look up to them as the Patrons and Patronesses of the University and the units within them.

The Order of Preachers

Close to four centuries into the Order’s existence, one of the Dominican brethren, Manila Archbishop Miguel de Benavides, O.P., willed the establishment of a colegio, where would-be priests will learn about theology, grammar, and the arts. This will was made before Benavides died in July 1605, and was finally realized on April 28, 1611, with the founding of the Colegio del Santissimo Rosario, later the Colegio de Santo Tomas, and the present-day University of Santo Tomas.

The Order of Preachers, through the Dominican Province of the Philippines, owns and operates the University of Santo Tomas. The community of friars ministering in the University is assigned to the Priory of Saint Thomas Aquinas.

Birth of the Dominican Province of the Philippines

The year 1970 marked the eighth centenary of the birth of St. Dominic. On April 30, 1970, the Master of the Order, Fr. Aniceto Fernandez, O.P., sent a circular to all Dominican Provinces, convents, monasteries, and sisters’ congregations, inviting all Dominicans to observe with due solemnity and fervor that significant occasion. In the Philippines, the celebrations were inaugurated on August 4, 1970, and were to end on December 31, 1971. Within this yearlong festival, two important events in the Order happened: the declaration of St. Catherine of Siena as Doctor of the Church on October 4, 1970, and the establishment of the forty-first Province of the Dominican Order, which would climax the celebrations.

On December 8, 1971, at about 9:30 in the morning, the Mass began with the Master of the Order himself as the main celebrant. Dominicans from all over the Philippines, as well as from other countries, graced the solemn occasion. In his homily, the Master of the Order recommended two things which he believed would guarantee the success of the new Province in continuing the glorious history of the Mother Province:

i – a great fidelity to the Church, to the Pope, to the hierarchy, to the Master of the Order, as had been exemplified in St. Dominic himself, our Founder, and;

ii – a great fidelity to the new constitution of the Order and to the decrees of the Second Vatican Council.

The ceremony proper for the inauguration of the new Province began immediately after the Mass. First came the reading of the Decree of Establishment of the Dominican Province of the Philippines. This decree provides information about the new Province:

After the reading of the decree, the Master of the Order announced the appointment of Fr. Rogelio Alarcon, O.P. as the first Provincial of the Dominican Province of the Philippines. Father Alarcon accepted his appointment in public, as provided for by custom, after which he made the Profession of Faith before the Master of the Order, as a manifestation of his trust in Divine Providence. After the Credo, all the brethren of the new Province approached the altar, and in one impressive expression of their allegiance to the new Provincial, they made the venia, the traditional sign of obedience to the Dominican superior. The Provincial then went on to deliver his inaugural address. After his talk, both the Spanish and Filipino Dominicans sang the triumphant hymn, Te Deum, and the ageless Marian antiphon Salve Regina, their voices blending into a melody of hope and intercession.

The Pontifical Universities are Roman Catholic universities under the authority of the Holy See. These are licensed to grant academic degrees in the sacred faculties, such as Canon Law, Philosophy, and Sacred Theology, in the bachelor’s licentiate, and doctorate levels. Studies in the said institutions normally address the Christian revelation and disciplines correlative to the evangelical mission of the Catholic Church. High moral standards and discipline are expected of students, and the teachings are also equivalent to the apostolic constitution of the Catholic Church.

The University of Santo Tomas, Manila, Philippines, was conferred the title “Pontifical” in 1902 by Pope Leo XIII. In the Philippines, UST remains to be the only university accorded such status.

How UST became a Pontifical University

The Holy Father sent Monsignor Giovanni Battista Guidi [on a mission to the Philippines]. A man of long experience in the Vatican diplomatic service, he arrived in the Philippines in November 1902. Guidi brought with him the Apostolic Constitution Quae Mari Sinico, signed in Rome by Pope Leo XIII on September 17, 1902 and which he promulgated in the Manila Cathedral on the feast of the Immaculate Conception, December 9, 1902. This document was of unprecedented importance because it introduced great reforms of far-reaching consequences to the local Church.

The relevant topics discussed were: the creation of four new dioceses, the need to increase the number of the native clergy, the foundation of conciliar seminaries, the importance of the Catholic missions and norms for the organization of the parishes, etc. One important section in the document dealt with the education of the youth and the programs of university studies in Manila.

After the revolution, the University of Santo Tomas was on the brink of extinction because of some decrees passed by the Malolos Congress and the refusal of the new political regime to recognize its curricular programs and degrees. Nevertheless, it eventually saw the threats of extinction vanish, thanks to the support of the highest authority of the Church.

Guidi served a copy of Quae Mari Sinico to the Dominicans who accepted it with great joy and exuberance because Section VII of the document contains a Papal declaration that conferred upon the University of Santo Tomas the title of Pontifical University and recognized its academic degrees as having the same value as those of other pontifical universities in the world. The UST Press reprinted the document in December 1902, not only in original Latin, but also in five other languages: Spanish, English, Tagalog, Ilocano, and Visayan. The pertinent section of the Quae Mari Sinico read:

The Bishops should be concerned not only with the Seminaries, but also with the other young students [in country] who are likewise entrusted to their care and solicitude. It is therefore their duty to see to it, with all diligence, that the youths who attend the public schools are not deprived of religious training. In order that this be properly attended to, let the Bishops take effective measures that the books used [in these schools] be not tainted with error.

Since we are speaking, of public schools, We cannot let this opportunity pass without bestowing the much-deserved praise on the great [University of Santo Tomas], founded by the Dominicans under the authority of Innocent X. This school has always shone in the integrity of its doctrine, in the excellence of its doctors, and has rendered great service [to the Church and country]. Therefore, We desire that all Bishops look upon it with favor, and We and Our Successors take it under Our patronage.

Hence, We confirm in all their plenitude the privileges and honors conferred on the [University of Santo Tomas] by the Roman Pontiffs Innocent X and XI and Clement XII, and We endow it with the title of PONTIFICAL UNIVERSITY, hereby declaring that the academic degrees that are conferred by it. Shall have the same values as those of other Pontifical Universities.

Since the beginning of the 13th century, some important universities were distinguished by the Church for their excellent quality of education. History attests that “of the 52 universities founded before 1400, there were 29 created by Papal decree, and 10 others by decrees jointly issued by the Roman Pontiffs, emperors and reigning princes. The most famous among these were the universities of Paris, Oxford, Cambridge, Bologna and Salamanca.” But despite their establishment by Papal authorization, those universities were not referred to as pontifical. In fact, with the passing of the centuries some of them lost their Catholic character because of the Protestant Reformation.

A look at the list of the present pontifical universities will illustrate the singular privilege granted to the University of Santo Tomas by the apostolic constitution Quae Mari Sinico in 1902. The 2000 edition of the Annuario Pontifico, the annual official directory of the Holy See, lists all Catholic and/or pontifical institutes of higher learning, grouping them into two categories: Roman Athenaeums and Catholic Universities. Only 24 are called pontifical, and of these, six are located at Rome (Gregorian University, Lateran University, Urbaanum Angelicum, Salesianum, and the Holy Cross University); three are in Europe; fourteen in Latin America; and only one in Asia: the University of Santo Tomas in Manila. 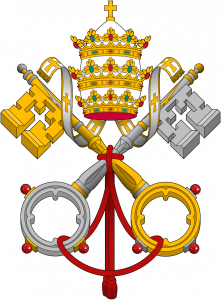 Break Time is the weekly Sunday Gospel reflection video produced by the Communications Bureau. The preaching features members of the Dominican family in the Philippines.

iLumen is a catechetical program that originated in the Dominican Province of the Philippines. Now produced by the Communications Bureau, the video series now focuses on content that explains Church teachings and also introduces to the faithful our role models, the Saints and Blessed.

Father Answers Questions is a catechetical program that aims to answer the faithful’s questions in a fun and quirky manner. Our guest priests base their responses on our Church’s teachings and localize them to the lives of the Filipino faithful.

Break Time is the weekly Sunday Gospel reflection video produced by the Communications Bureau. The preaching features members of the Dominican family in the Philippines.

Rix the Seminarian is a Catholic vlogger in the person of UST seminarian Br. Enrico Macrohon.

Feature from the Philippine News Agency

Papal Visits to the University of Santo Tomas 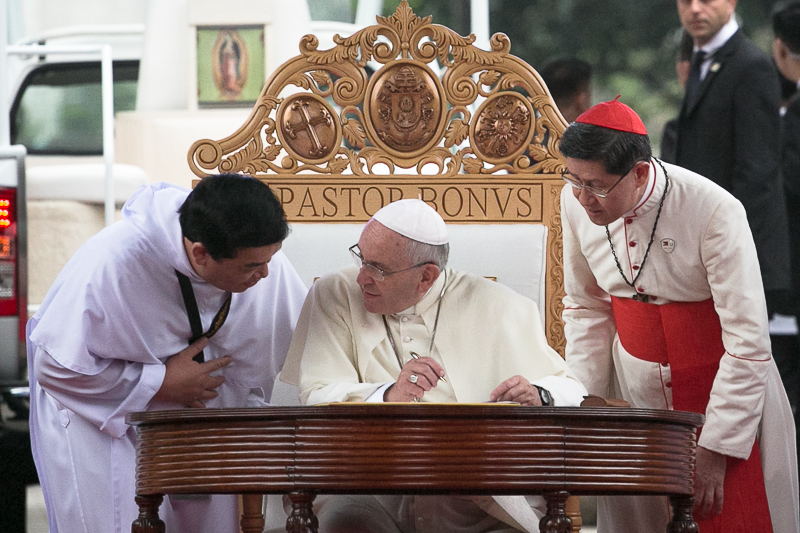 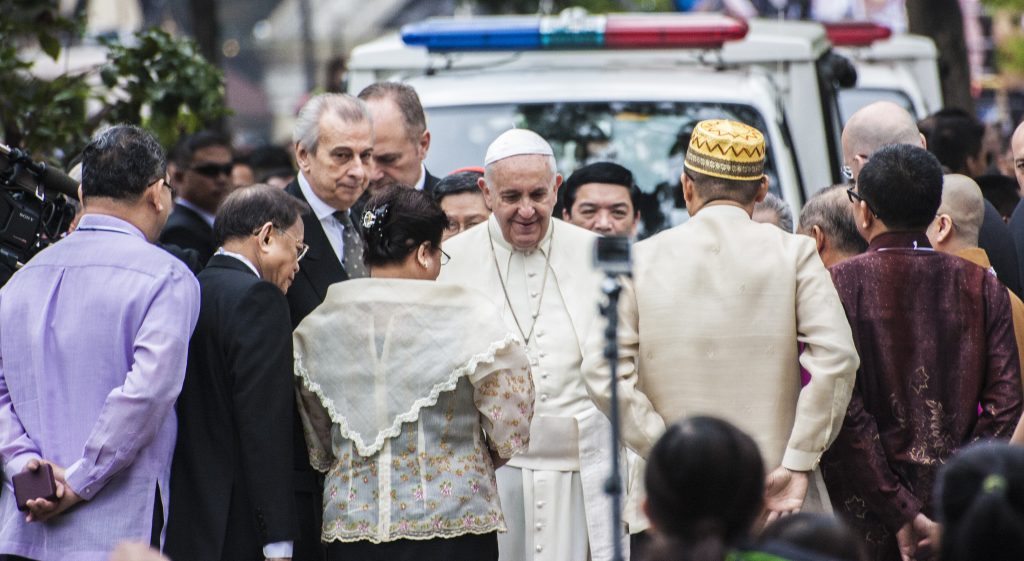 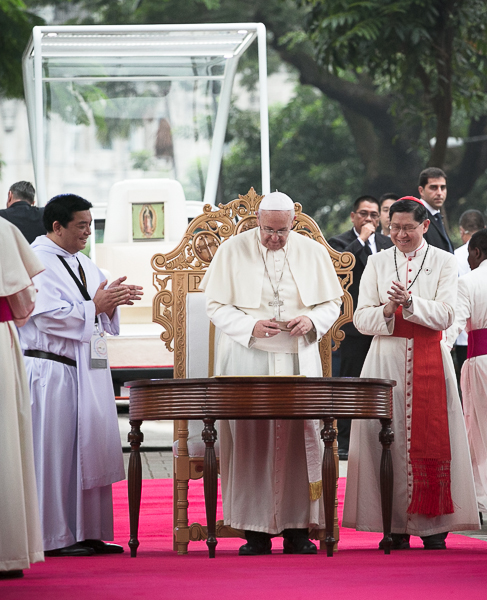 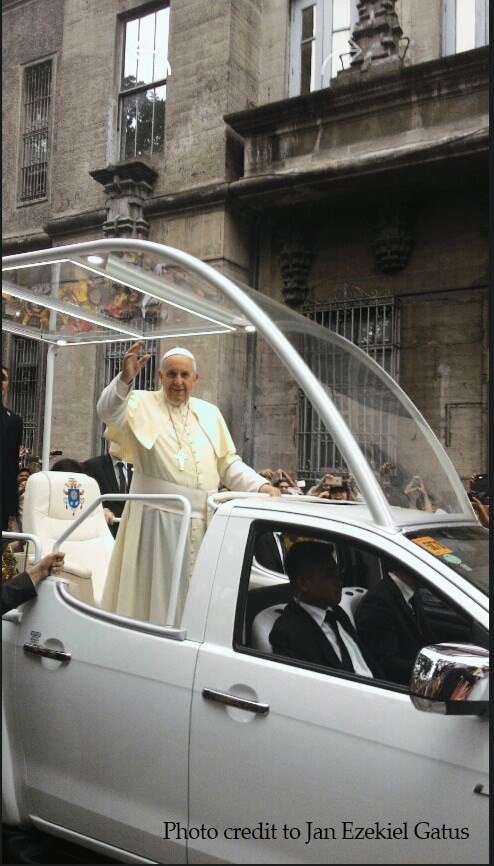 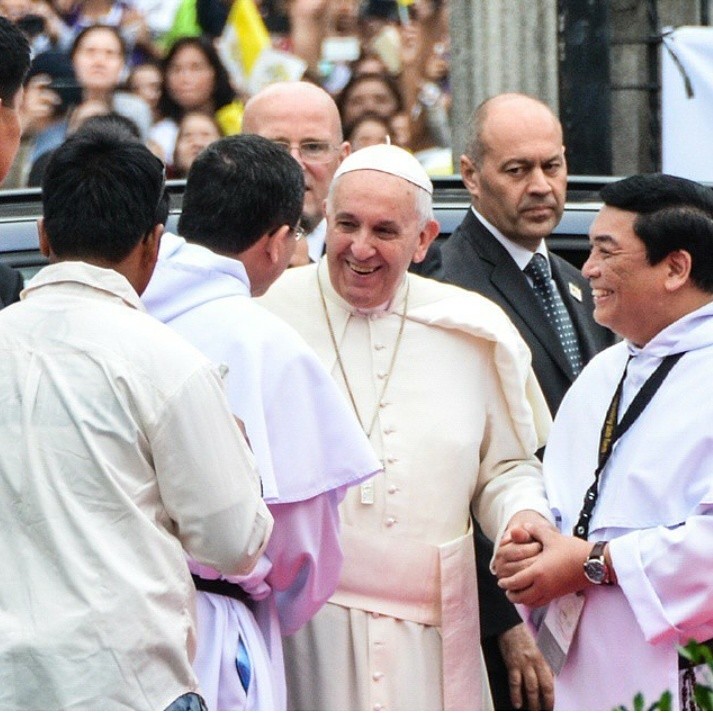 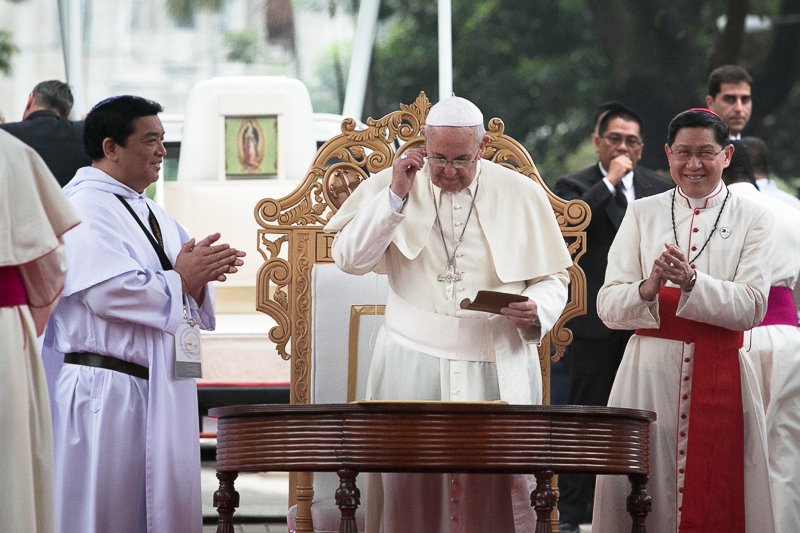 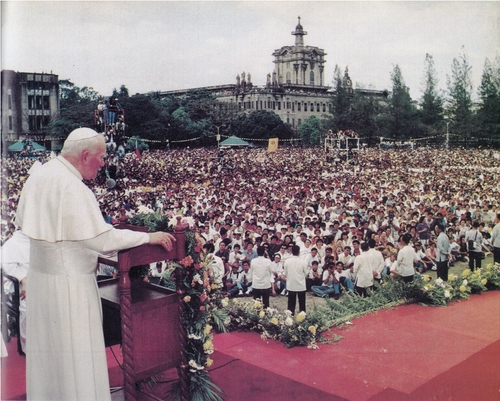 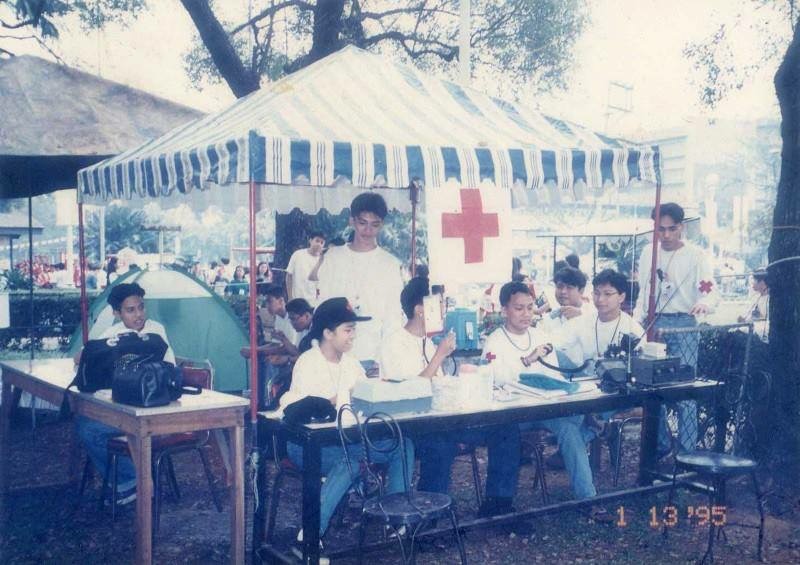 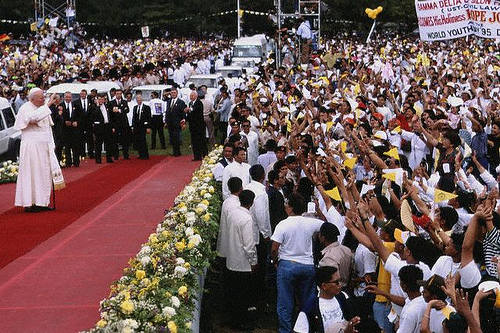 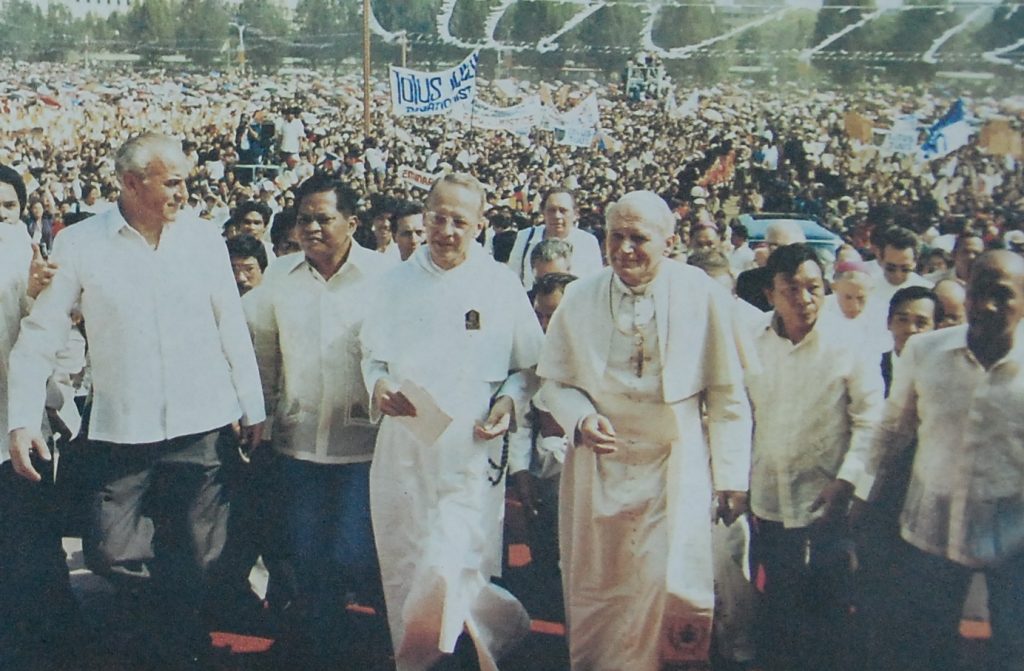 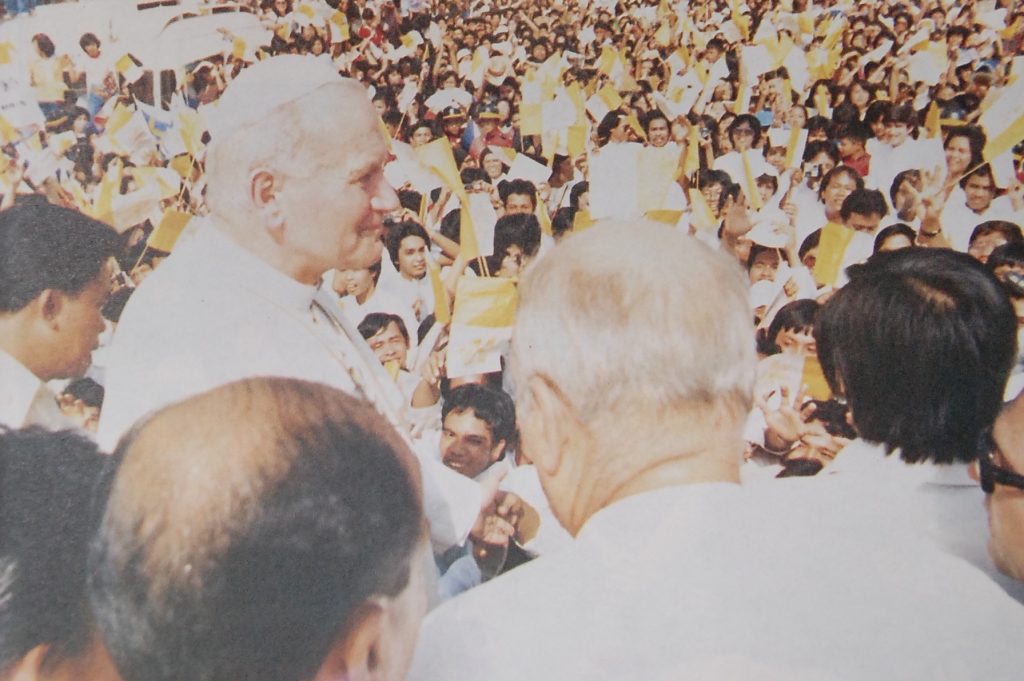 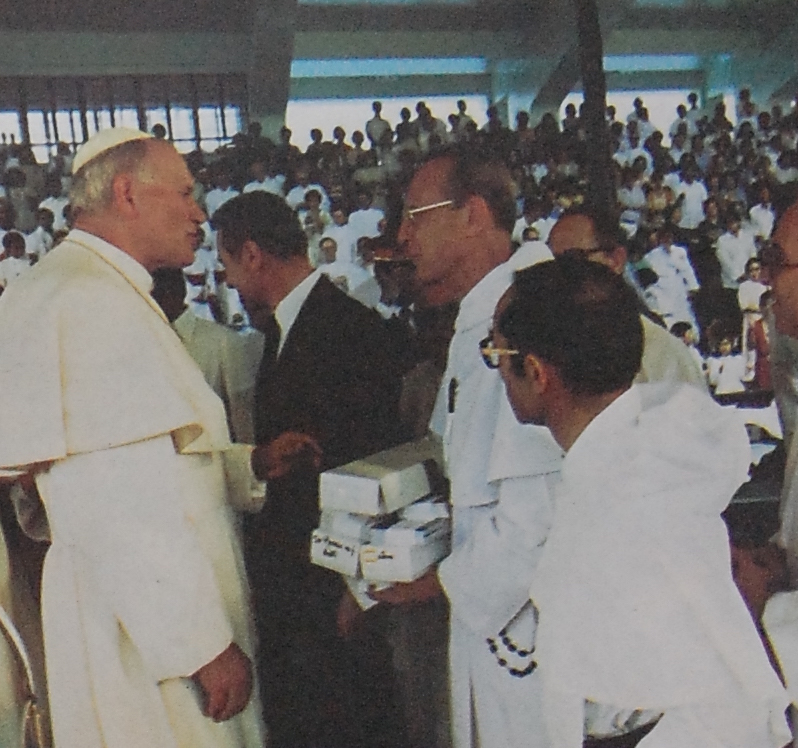 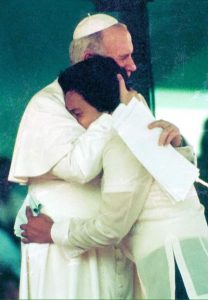 Prof. Lilian J. Sison, PhD, Secretary-General of Religions for Peace Philippines, emphasizes what interreligious and interfaith dialogue entail in this episode of Zoomed In.

On October 8, 2021, the College of Science and the Center for Theology, Religious Studies, and Ethics held the 2nd Albertus Magnus Faith and Science Lecture, which gathered religious leaders from different faith and belief systems to advocate for COVID-19 vaccination, dispelling fears that vaccination may run contrary to religious beliefs.