Assoc. Prof. Eric B. Zerrudo, PhD, Director of the Center for Conservation of Cultural Property and Environment in the Tropics lectured on the contexts behind the cultural heritages and expressions that stemmed from the centuries-old Dominican apostolate on March 9, 2021 via livestream. 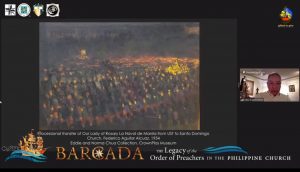 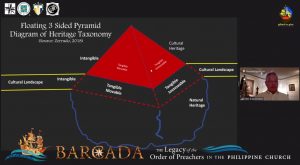 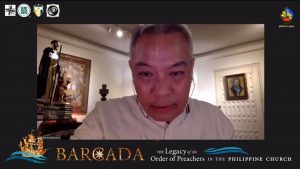 “Many Dominican Heritage has been conditioned. We don’t know if they are really a reaction to prevailing circumstances of the time. They are just working within a particular context,” Zerrudo said, citing the Battle of La Naval in 1646 that ignited the devotion to the Our Lady of the Most Holy Rosary.

“With the intending arrival of Dutch troops, Philippine defenders sought the intercession of Santo Rosario and promised to walk [on] their foot to Sto. Domingo Church. After they have won their [five] battles, the defenders did walk on the Santo Rosario barefoot. And the first procession was held in 1647. And in 1652, the devotion to La Naval was officially declared.” Zerrudo said.

Moreover, Zerrudo stated that the cholera outbreak in 19th century became an impetus that gave birth to the Faculty of Medicine and Surgery in 1871; it developed the curiosity cabinets of specimen, which became part of the initial collections during the establishment of the UST Museum.

However, Zerrudo challenged the Dominican’s vision and philosophy of loss since there are some evocative structures still linked to the Dominicans that are currently left in ruins such as the Dominican Hill in Baguio and the abandoned Colegio del Santisimo Rosario Lingayen in Pangasinan.

The Dominican Influence in Babuyan Islands

According to Zerrudo, the Dominican mission molded the concept of cultural landscape in the Babuyan Islands, where it nurtured the interaction of the religious and the local community. “The (cultural) landscape has produced traditions, skills, structures, and even language over a period of time,” he said.

The España heritage
Within the 21.5-hectare campus, the University of Santo Tomas has been keeping natural and built heritage.

Moreover, the University is a thriving ground for rare trees and plants in the Botanical Garden and in the Benavides park, serving as the lungs of the campus, and also the City of Manila.

To add to these, the campus also has man-made heritage sites declared as National Cultural Treasures in 2010: the Main Building, Central Seminary Building, Open Field, and the Arch of the Centuries. In 2009, as a proactive approach, Architects Clarissa Avendano and Willa Solomon mapped out the UST Main Building Conservation Management Plan.

Meanwhile, the University’s movable heritage in possession are the collections kept in the UST Museum, UST Archives, and Miguel de Benavides library.

According to Zerrudo, the University also has its intangible heritage, which are celebrated every academic year, in the form of festivities and traditions such as the Annual Paskuhan, Discurso de Apertura, Freshmen Walk, and the Founding Celebration in April.

Forgetfulness and endangerment
An advocate of heritage preservation, Zerrudo talked about the threat of memoricide, a deliberate erasure of memory through demolition of heritage sites that link to present.

“Heritage is a human construct that ascribes value to expressions from the past that gives meaning/identify to the present and ensures its continuity to the future,” Zerrudo said.

For Zerrudo, the definition of heritage highlights three things: the crucial role of man or society in defining heritage; heritage assessment to establish value; and the transmission of its value across the past, present, and the future. “Basically, it is meaning-making that leads to world assembling,” he said.

“Heritage conservation is an intentional act based on the significance which can either be precautionary or proactionary,” he said.

“The concept of endangerment sensibility sets the awareness to natural and man-made vulnerabilities that are imminent to the heritage resource,” Zerrudo said.

The Future of Heritage for the Dominicans

As he neared the end of his sharing, Zerrudo posed questions on how the new Dominican leadership, represented by the first Asian and first Filipino Master of the Order and the new Prior Provincial of the Dominican Province of the Philippines, will move forward in preserving and utilizing the heritage of the Order of Preachers in the archipelago.

Taxonomy of Heritage
According to Zerrudo, heritage is classified in a three-sided pyramid diagram: Underwater, which is a natural heritage referring to the nature of the universe; above ground, cultural heritages realized the moment man develops knowledge, practices, structures, objects, and products of his interaction with nature.

The liminal space where culture creates an evolving relation with nature is called cultural landscape. “So nature and culture are components connected to a relational phenomenon,” he said.

This heritage talk is a part of a webinar series entitled Barcada: The Legacy of the Order of Preachers in the Philippines.