Capping the August 9 Onboarding activities for the freshies of the higher education cluster was the  unveiling of the University’s iconic Tiger statue and UST block letters, which are found in the Plaza Mayor and usually join the Main Building in stills that immortalize UST.

The Tiger, which is depicted in an act of leaping and pouncing, shows agility and vitality, two important qualities as the University rises above the challenges posed by the pandemic. Fr. Austria stated that the figures at the campus that boast Thomasian identity roar a symbolic message that the community has risen above the COVID-19 pandemic. “It is a symbolism for us to get out of this pandemic, [to] rise above the pandemic, and our expansion,” Fr. Austria said.

Also unveiled were the new UST block letters, which conform to the official font style adopted by the University in its official correspondence. “The letters represent the University’s tradition of excellence for having nurtured saints, martyrs, heroes, leaders in various fields, connecting the past 411 years of existence to the current and future generation of Thomasians,” said Secretary-General fr. Louie R. Coronel, O.P., EHL.

Fr. Coronel also underscored the importance of the open and common spaces in the campus for it showcases the University’s heritage, treasures, culture, and values, which are gifts that the community enjoy with pride. 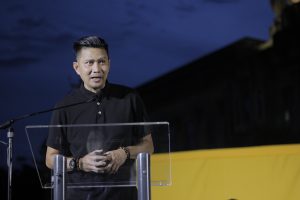 In his message, David requested for the Thomasian Community’s support, promising that he will steer the young basketball team, in rebuilding process at present, in his coaching stint. “We will put time and extreme effort para makatulong sa Tigers,” the former Glowing Goldie added.