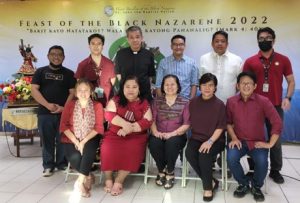 In line with the conference objectives, the topics and strands surfaced on the Black Nazarene were as follows: universal devotion; personal encounters– hope, healing, and renewal; miracles; socio-anthropological, ecumenical and inter-faith views; Filipino Christology; current situation in the age of social media; and evangelization trends, both domestic and global.

The keynote address was delivered by His Eminence Cardinal Luis Antonio G. Tagle, DD, whom Pope Francis designated as Prefect of the Congregation for the Evangelization of Peoples in 2019. Cardinal Tagle emphasized the importance of devotion to God—not by superficial worship but by the strength of belief in divine providence. In his incisive tracing of the history of the Filipinos’ devotion to the Black Nazarene, the Cardinal underscored the values of thanksgiving and utang na loob (sense of gratitude).

In his closing remarks, Msgr. Coronel gave an accolade to all who participated in the forum: “Engaging the community of the Nazareno in this age means immersing into a life of dedication, service, and commitment.”