The oldest medical school in the Philippines, the University of Santo Tomas Faculty of Medicine and Surgery (UST-FMS), commenced the celebration of its 150th anniversary through the Sesquicentennial Inaugural Ceremonies. Livestreamed through UST’s official Facebook page on May 28, 2021, the event was held at the UST Quadricentennial Pavilion, utilizing below four percent of its seating capacity. 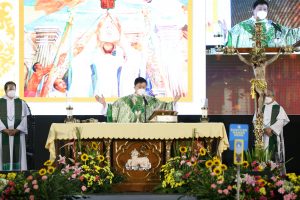 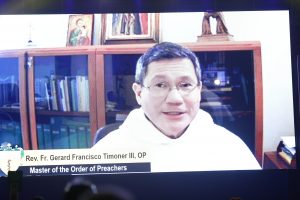 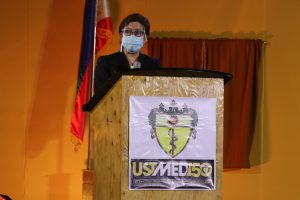 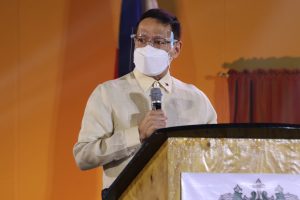 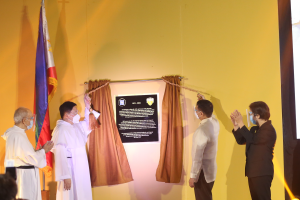 The ceremonies began with a Eucharistic Celebration presided over by UST Rector Very Rev. Fr. Richard G. Ang, O.P. It was concelebrated with the Dominican Fathers, including the Prior Provincial Very Rev. Fr. Filemon I. dela Cruz, Jr., O.P., and UST-FMS Regent Rev. Fr. Angel A. Aparicio, O.P., who served as the homilist.

In his keynote message, Sec. Duque also congratulated the UST-FMS, saying that “For 150 years, the Faculty has stayed true to its mission of forming capable and compassionate individuals committed to serve the Church, the nation and the global community. This occasion is indeed worthy of celebration.” He further commended the FMS for remaining “at the forefront of medical education and development in the country through its Christ-centered formation.”
Sec. Duque is the most recent of the Thomasian Secretaries of Health, which include Drs. Basilio J. Valdes, Jose Locsin, Antonio Villarama, Antonio Periquet, and Carmencita Reodica, among others.

“The celebration of FMS’ 150 years of existence is not only a tribute to its rich heritage, but also a proclamation of how it has evolved through time,” said UST-FMS Dean Ma. Lourdes P. Domingo-Maglinao, M.D., in her Welcome Remarks and Sesquicentennial Message.

It was a sentiment supported by the fact that, with a limited audience, class representatives from batches as far back as 1953 up to more recent years, were in attendance, and previous FMS deans sent in messages in a video presentation. These different generations that were present, including its online viewers, jointly witnessed not only an overview of UST-FMS historical significance, but also the promise of ongoing and future projects, which include the Saints Cosmas and Damian Simulation and Research Building, which broke ground in January 2020.

As UST Rector Very Rev. Fr. Richard G. Ang, O.P., puts it, “This event is truly a milestone not only for the University but also for the Filipino nation… All over the world, Thomasian doctors leave their indelible mark in the community where they belong. They are bearers of light, messengers of hope during this pandemic. A characteristic most admirable in FMS is the ability of its people to rise above the challenges and overcome adversities by building bridges and making ways to help the needy.”

This value was also noted in the House Resolution #1746, which congratulated and commended UST-FMS not just for its sesquicentennial anniversary, but also for its “considerable contribution to the development of medical and healthcare educational institutions in the country.”

The House Resolution also specifies that UST-FMS “is known to have trained and instilled in medical learners the values of compassion and service, particularly to the underprivileged, as evidenced by its various community development activities including countless medical missions.”

The Master of the Order of Preachers and UST Grand Chancellor Very Rev. Fr. Gerard Francisco P. Timoner, III, O.P., sent a special message to congratulate UST-FMS on its milestone.

The Sesquicentennial Marker was unveiled during the program. The marker was eventually installed on May 29, 2021 at the Plaza Santo Tomas in Intramuros, where the original UST campus was once located. The installation was attended by Secretary of Tourism Hon. Bernadette Romulo-Puyat and Manila City Mayor Francisco Domagoso. An identical copy of the Sesquicentennial Marker will be installed at the Medicine building of the Espana campus.
As one of the leading medical schools in the country, UST-FMS is a recognized Center of Excellence by the CHED and has produced topnotchers in the physician licensure examinations in recent years.