The University of Santo Tomas was crowned the University Athletic Association of the Philippines (UAAP) Season 84 General Champion, its fifth consecutive and 45th top plum in the collegiate division on June 21, 2022, at the Mall of Asia Arena. 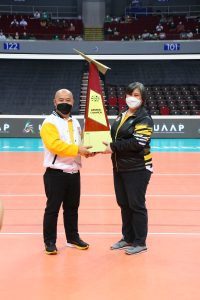 In the juniors division that was not held this year due to the ongoing pandemic, UST also has 21 crowns, for a total of 66 general championships.

Rancel Varga was named the “Most Valuable Player” in Men’s Beach Volleyball, while Sherwin Concepcion was named the MVP in the Men’s 3×3 Basketball. Aidaine Laxa was named the “Rookie of the Year” and the MVP for Poomsae, as well as taking home the silver medal in the women’s individual event.

Returning from a two-year hiatus, the UAAP Season 84 was conducted through a bubble setup.