In his homily, fr. Leydon recalled the mountain range’s vital role in assuaging typhoons that strike Luzon. Recently, Typhoon Karding’s onslaught led to the postponement of many activities in Luzon, including this activity in the campus that aims to educate the Thomasian community about its natural role and how we can protect it. 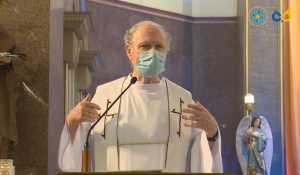 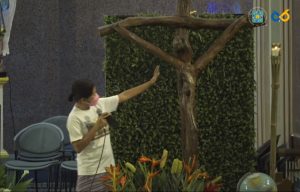 The wooden cross, the cornerstone of the activity, was forged from the three driftwoods found in Sierra Madre. After ten years, since the Holy Week of 2012, the cross will once again travel across the country to urge Filipinos to protect and to give importance to God’s natural gifts. Sierra Madre faces the threat of  deforestation and excessive mining. Moreover, the construction of Kaliwa Dam will permanently tamper and destroy the old-growth tropical rainforest, as well as interfere with the biodiversity in the area.

Sierra Madre also holds around 1.4 million hectares of forest, which constitutes 40% of green area in the country.

According to her, the driftwoods were not altered to form and emulate the image of Christ in the Cross and were assembled as it is. One of its noted detail is the hole at the trunk that resembles the wound of Christ.

For Conrado Vargas, Executive Director of SSMNAI, the construction of Kaliwa Dam in General Nakar, Quezon will bring excessive flooding, leading to displacement of its residents. Moreover, Vargas urged the people to support the municipalities in Quezon province that have the power to stand up by refusing to issue permits/resolution for the dam’s construction. “Kapag hindi po pumayag ang mga munisipyong ito, hindi rin po matutuloy yung Kaliwa Dam,” he said.

On behalf of the fishermen affected by black sand mining, Heidi Fernandez of Save Zambales Kalikasan Movement shared her story of victory. She narrated that the black sand mining contributes to the destruction of bodies of water in Zambales. After receiving backlash from the residents, the Department of Environment and Natural Resources admitted that black sand mining was illegal, thus issued a cease and desist order, according to Fernandez. “Napapatunayan po natin na sa sama-samang pagkikilos, kinakaya nating manalo.” Fernandez said..

Ikalawang Paglalakbay ng Krus ng Sierra Madre coincided with the Season of Creation and the Feast day of St. Francis of Assisi, Patron Saint of Ecology.