With the theme “Solidarity, Equity and the Global Challenge for Universal Access to Vaccination”, the College of Science hosted the 2nd Albertus Magnus Faith and Science Lecture, featuring religious leaders from different faith and belief systems on October 8, 2021 via Zoom. This event was co-organized by the UST CoVAX team and Uniharmony Partners Philippines.

The lecture featured Biological Sciences Professor fr. Nicanor Pier Giorgio Austriaco, O.P., SThD and Thomasian alumnus Dr. Antonio “Tony” Leachon, who shared the latest updates on the COVID-19 situation in the country, the vaccine rollout, as well as how the pandemic can possibly end in the country. In relation to the vaccination efforts, religious leaders from various faith and belief systems shared their reactions to the talks to encourage their constituents to get vaccinated, dispelling the reservations of people about the vaccines for reason of religious beliefs. 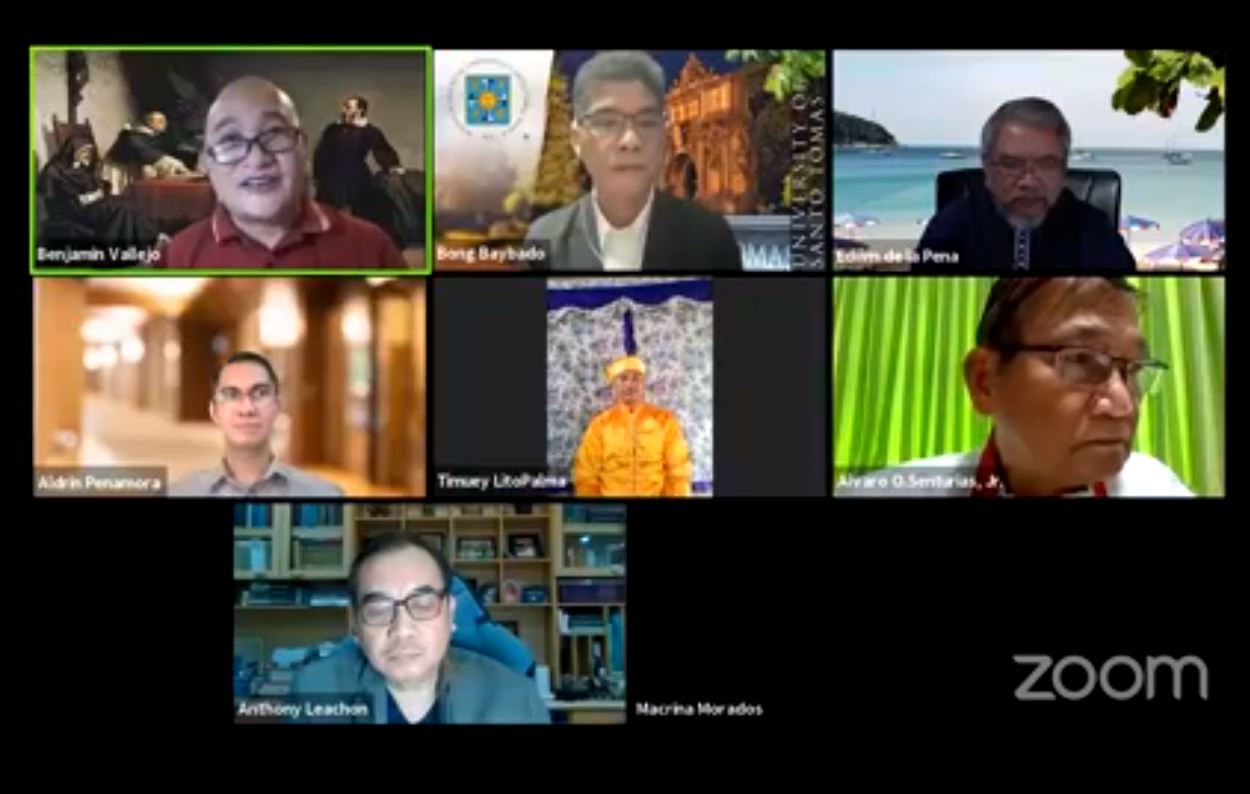 According to Bishop Edwin dela Peña, Chairman of Episcopal Commission on Interreligious Dialogue of the Catholic Bishops Conference, part of their interreligious campaign in Marawi City was to disseminate scientific information on the benefits of the vaccines to the communities and the parishes under his jurisdiction.

“Most of the people who got vaccinated during the first vaccination [belong to the] Catholic population. There are a lot of hesitancy from our Muslim brothers and sisters. And we understood that they needed to see for them to believe that the vaccine was safe,” he said. “It is not surprising for us to realize that during the second rollout, the Muslims also lined-up to get vaccinated,” Bishop dela Peña added.

For dela Peña, this was an experience of interreligious dialogue where the Catholics gave assurance to the neighboring Muslim community that the vaccines were safe. Moreover, this act encouraged them to take every opportunity to get vaccinated considering that the supplies in Bangasmoro Autonomous Region of Muslim Mindanao (BARMM) were also scarce.

“It is very important for us religious leaders to interact with the people to really show to them that we really have to get vaccinated to protect ourselves and the community. Our religious standing and the trust that they have on us is very important to be able to listen from their pastor and their bishop himself,” he said.

Likewise, Ptr. Dr. Aldrin M. Peñamora of the Philippine Council of Evangelical Churches affirmed that the moral ascendancy of the religious leaders can build trust to its constituents because their role was to set a good example. “Many of our constituents may not understand everything scientifically, but there is a trust pattern they look at the religious leaders as someone who are trustworthy,” Peñamora said.

‘Pandemic of the unvaccinated people’

Reiterating the role of the Church’s significant role in building a healthy community, Ptr. Alvaro O. Senturias, Jr. of the Cosmopolitan Church – United Church of Christ in the Philippines said that while health is a basic human right, the active participation of people of God, through various institutions, will enable the Church its healing ministry.

“While it is the duty of state to provide the healthcare, the Church has a moral responsibility toward the attainment of a wholesome and healthy life for everyone, as God intended, recognizing that the art and the science of healing is an integral part of the message of salvation,” he said.

Noting that this health crisis was also a “pandemic of the unvaccinated”, citing the case of the United States of America, Senturias said that their community supports the vaccination program.

Moreover, he also said that the country needed an effective leader that will guide the country out of the Covid-19 pandemic, as well as putting doctors and healthcare professionals in charge of the task force that handles the  pandemic responses in the country.

Prof. Macrina A. Morados, Dean of the Institute of Islamic Studies of the University of the Philippines – Diliman, cited that the vaccine hesitancy among Muslim neighbors stemmed from the verse 2:155  of the Holy Quran, which states as “And we will surely test you with something of fear and hunger and a loss of wealth and lives and fruits, but give good tidings to the patient”.

“I think this verse is one of the source of hesitancy of Muslims to avail the vaccine because they look at this as an inspiration. Allah says if we will be patient and entrust everything to Allah Subhana Wa Ta’ala, then it is Allah who will provide a way out from that kind of difficulties,” she said. Another pre-cautionary measure that became an impediment in taking the vaccine, Dean Morados said, was the absence of literal word “vaccination” in the Holy Quran and the issue on halal. “One of cause of hesitation from the Muslim is the issue on halal, whether the vaccines contained pork,” she said.

Dean Morados, then, noted that the other factors that fuel vaccine hesitancy, especially with the Muslim elders, were the long-term mistrust with the government and its initiatives, and the proliferation of fake news. However, she cited the good vaccination practices exemplified by the Muslim countries United Arab Emirates and Saudi Arabia, implying that getting the vaccine was within the Islamic principles.

“One of the Muftis in Saudi Arabia said that vaccination to him […] is to think that it is not only permissible, meaning you have an option whether to do it or not, but we have to take it as obligatory, meaning you are not only to protect yourself but you are also to protect the community.” she said.

The moderators of this event were Dr. Benjamin M. Vallejo of the Institute of Environmental Science and Meteorology – University of the Philippines – Diliman and Dr. Pablito Baybado, Jr. of the UST Institute of Religion. This event was in partnership with the Office of the Secretary-General, the Communications Bureau, and the Office for Public Affairs.