The University of Santo Tomas and professional services firm SyCip Gorres Velayo & Company (SGV & Co.) formalized the granting of scholarships to accountancy students through a virtual signing of the Memorandum of Agreement on August 20, 2021, via Zoom. 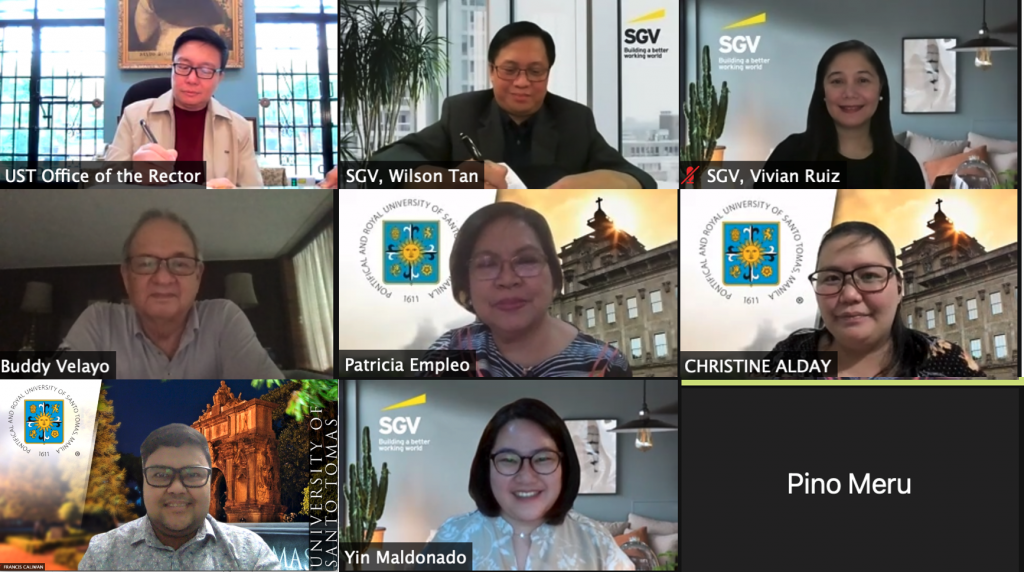 On the occasion of the 100th birth anniversary of UST alumnus and SGV co-founder Mr. Alfredo M. Velayo, after whom the College of Accountancy was named, the accounting giant SyCip Gorres Velayo & Co., through the SGV Foundation, pledged a total of 5,000,000 PhP in scholarship grants. Deserving accountancy students will enjoy full defrayal of tuition and miscellaneous fees.  SGV & Co. will provide P1,000,000 worth of scholarships per year for the next five years beginning the First Term of Academic Year 2021-2022.

In his message, Mr. Buddy Velayo, son of Mr. Alfredo M. Velayo, recounted how his dad would happily tell them that he was very honored that the UST College of Accountancy was named after him. He also noted how the College has achieved so much in its 16-years of existence.

Being one of the best students in class, Velayo was invited by the dean, Dr. Stanley L. Prescott, an American CPA, to teach accounting courses in the evening, while he attended his classes as a third year student in the daytime. When he passed the CPA board exams, he was only 18 years old, and he received his certificate only when he turned 21, the legal age in the country at that time.

Velayo, an accountant, business leader, teacher and philanthropist, was married to Harriet Lazaga, a lawyer, with whom he has four children: Kathy, Alfred (Buddy), Michael, and Richard.  He died in 2014 at the age of 92.