Honoring St. Albertus Magnus in the inaugural Faith and Science lecture, hosted by the College of Science, Prof Jonathan I. Lunine, PhD, Chair of Department of Astronomy of Cornell University lectured on the life of fr. George Lemaitre, whose life was spent on the cusp between religion and science, on March 8, 2021, via livestream. 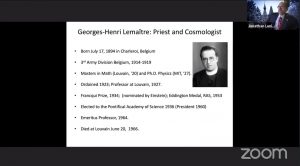 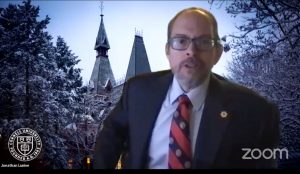 Brief history of Lemaitre’s time
In his lecture, Lunine tackled the heterogeneity of faith and science through the years of clashing ideas. Exploring the instances where science and religion went hand-in-hand, Lunine revisited the life and the significant contributions of Lemaitre, a Catholic Belgian priest-scientist who revolutionized cosmology with his Big Bang model.

“He developed an exact solution to general relativity that was a hybrid between the center model of an empty universe, and the Einstein model. Indeed, it was essentially the center universe at early times it would converge into an Einstein model,” Lunine said. “But Lemaitre’s model was an expanding universe. The universe was actually expanding in his solution. Space was increasing in volume over time and this became one of the classic metrics for a homogenous isotropic expanding universe. It was really the first successful one,” he added.

In other words, a homogenous universe means that any place in the universe look more or less the same as any other, while isotropic, in essence, means every celestial object would look the same when viewed in different parts of the sky.

According to Lunine, astronomers realized that galaxies had its own proper motion toward or away from us, and the speed of a drifting galaxy can be determined through the changes in the spectral pattern. The more the motion falls in the red zone of the spectrum, the more the galaxy would indicate that it is moving away.

“Lemaitre understood immediately that, in fact, what was happening was space was expanding because what was seen in the spectra of galaxies was exactly what he had expected from his solution to the equations of general relativity,” he said.

In 1931, Lemaitre published his full idea for Big Bang and its finite beginning.

This accusation was refuted by Lemaitre and said this was not theologically inspired. However, Pope Pius XII’s eager intervention, through Fiat Lux, stamped and tainted Lemaitre’s defense.

Nevertheless, before his death, Lemaitre had been triumphant against Hoyle because the Big Bang model was understood through ubiquitous radio background noise detected in 1965, a key factor that is not predicted by Hoyle’s model.

In the name of both science and God
Using Lemaitre and other clergymen, who had a successful career in science, as role models, Lunine urged the educators to never lose their faith and belief in God in the name of science alone. “All educators should give to such young scientists. Not only do you need to give up your faith in order to do science. To give up that faith is beyond the danger of one’s immortal soul is a way of closing off the part of our human spirit that appreciates the implications of that science,” he said.

“The wonders of creation are things that we learn about through science, but we appreciate through our faith. It’s not a question about holding one’s faith; it is a question of that faith being a gift by which we deeply appreciate, the discoveries being made thorough science,” he said.

He noted that such scientists who held firm to their faith added an extra dimension to their existence and enhanced their appreciation of the science they work on.

Parallelism of Big Bang and Genesis
Lunine expressed his stance on embracing Lemaitre’s insights. “The book of Genesis and the creation story of Genesis are inspired by God, and it is a story of how God creates a universe that is good—in fact, it is very good—and has order to it,” he said.

Moreover, Lunine put into context the time when Genesis was written and the people who wrote it only have sufficient knowledge of the natural world they were dwelling in at the time. “At the time Genesis was written, those who had written the pages of Genesis had lack of knowledge of modern cosmology. If St. Paul or Moses had needed to know the theory of general relativity in order to write down what was important, which was the salvation history of humankind, then they would have been given knowledge but they did not need that,” he said.

“They only need to know the natural world of their time. And so, as a consequence, Lemaitre cautions us to try not to read the bible as a science textbook. The Bible is the salvation history of humankind and the development as we know it is,” he added. “Genesis tells us that God created something that was ordered and good in a way which we play an important and a pivotal role,” he said.

Science as a journey to endless learning process
According to Lunine, the knowledge in science was not constant, meaning that what is true today can be changed tomorrow. “Science is an adventure in which the things that we think we know today are not necessarily what we are going to know tomorrow. Back in the 18th century, the universe was thought to be a giant mechanical clock that ran according to Newtonian physics,” he said.

“The discoveries and the insights of late 19th and the early 20th century both in general relativity and in quantum mechanics demolished that view of reality. Our universe is not a deterministic clock,” he said.

On God
Lunine expressed that physicist Stephen Hawking lived his life without having a similar view or concept of God as Catholics and Christians have. “The god that Stephen Hawking didn’t believe in is not the God that I believe in either. Hawking thought of god as a sort of a superbeing within the universe or within space and time, rather than being a pure act or pure being itself,” he said. “Every cosmologist and black hole physicist, Hawking included, in some way bails on the work that Lemaitre did in the 20s or 30s,” he added.