A team of Bachelor of Science in Medical Technology program seniors of the Faculty of Pharmacy presented their research paper and were named the “Best Oral Presenter” in the World Conference on Public Health 2021, which was held on November 26-27, 2021 via Zoom. 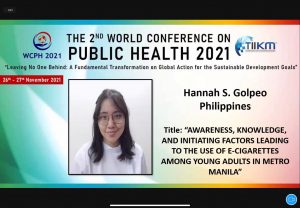 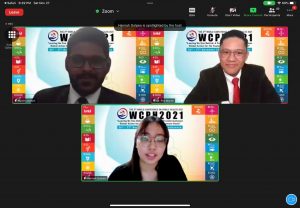 The salient findings of their study, according to Golpeo, showed that the level of awareness and knowledge of the respondents, who were all smokers, were at a moderately perceived level, and it was also noteworthy that there was no significant difference existed in the perceived level of knowledge of awareness when the respondents were grouped according to the type of cigarette they were using. “The data obtained from this study also showed that the primary initiating factors that lead to the e-cigarette use of young adults are: environment-friendliness, flavor satisfaction, curiosity, influence from peers or family members, and the e-cigarettes being a healthier and cheaper alternative compared to tobacco cigarettes,” Golpeo said in an interview with the Communications Bureau.

“Upon further analysis, it was found that, although joining the trend was not a relevant initiating factor, it was positively correlated with age. This finding implies that as an individual ages, it is more likely for him/her to initiate e-cigarette use for the purpose of joining the trend,” she added.

Recognizing its relevance in the field of public health, Golpeo shared her thoughts on what prompted her and her co-authors to explore this topic. “Although (e-cigarettes have) a common notion that it is a safer and healthier alternative to smoking the traditional tobacco cigarettes, as students from the field of health sciences, we still had our doubts. Thus, we initially did some research on the matter and we found several studies stating that although marketed as safe, it still has its fair share of health risks especially along with long-term use,” she  said.

The abstract of their study states that “as consumers became more aware of the health risks of tobacco smoking, ‘healthier’ alternatives were sought. In the Philippines, e-cigarette use has been found to be increasing not only for smoking cessation but also for several other reasons. However, this ‘rise to fame’ of e-cigarettes does not come without any risks. Thus, to contribute to the growing knowledge on this field, this study was conducted to determine the knowledge, awareness, and initiating factors that lead to the use of e-cigarettes among young adults in Metro Manila.”

The data gathered in this study were drawn from 131 respondents aged 18-30 years old in the National Capital Region using a piloted questionnaire floated online in different social media platforms. Respondents were further categorized whether they were sole e-cigarette users, sole tobacco users, or dual users.

The theme of the conference was “Leaving No One Behind: A Fundamental Transformation on Global Action for Sustainable Development Goal”.

Medicine receives commendation on its 150th year of service to UST, PH from Senate