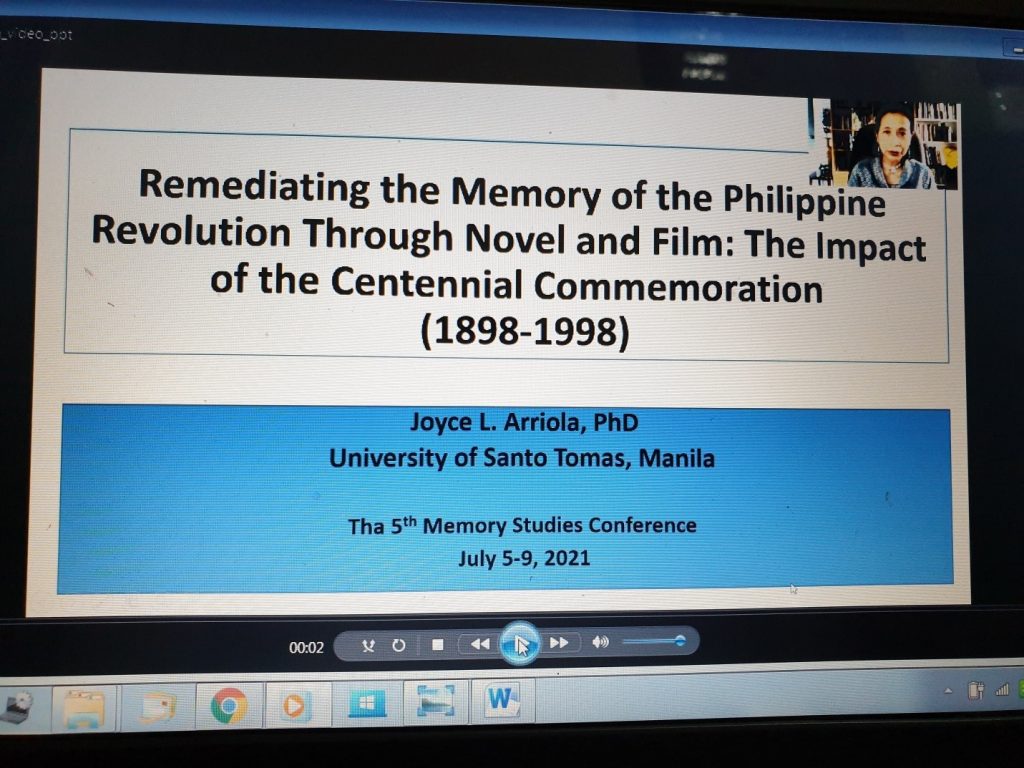 The conference focused on the subject of memory as an object of study across history, sociology, political science, literature, art studies, anthropology, and psychology.

Arriola’s paper, titled “Remediating the Memory of the Philippine Revolution in Cinema and the Novel: The Impact of the Centennial Commemoration (1898-1998),” was read under the “Memory and Area Studies: Reflections on Convergence and Future Directions” panel. It tackled the role of the novel and cinema in commemorating the Philippine Revolution of 1896 and the declaration of Philippine Independence in 1898. It traced the possible impact of the Centennial Commemoration on the novels and films tackling the so-called liminal years of the revolution (1899-1902) because these were transitory, nebulous, obscure and almost forgotten in the annals of revolutionary history as these were overtaken by other events that competed for the attention of key players, historians and the succeeding generations of post-Liberation Filipinos.

The novels analyzed include centennial prize winners such as Eric Gamalinda’s My Sad Republic (2000) and Azucena Grajo-Uranza’s A Passing Season (2002). Gina Apostol’s novel titled Insurrecto (2018) traces the possible impact of the centennial-winning novels. Regarding the films, the paper traced the influence of the Jose Rizal biopics on Heneral Luna (2015) and Goyo (2018).

Arriola’s paper focused on remediation of memory, which took place as precursor texts such as traditional historiographies and novels that are transposed into mass media texts such as films and further invite intermedial and plurimedial texts such as discussions on social media, online reviews, and spin-offs into other genres. This phenomenon leads to intermediality and pluri-mediality of memory, which is an emerging topic in memory studies. It maps the destination, afterlives, and cycles of memorialization.

This was the third time Arriola, who also teaches at the UST Graduate School, joined the MSA Conference. She first joined the Copenhagen, Denmark conference held at the University of Copenhagen in 2017. She then participated in the conference in Spain held at the Complutense University Madrid in 2019. Arriola is one of the active members of the MSA Asia Working Group, which is currently being chaired by Kar Yen Leong of Tamkang University