The University of Santo Tomas Department of Philosophy launched the Syllabi Gender Gap Project to address the dearth of female philosophers and authors on course syllabi. For its inaugural lecture, Dr. Sara Protasi of the University of Puget Sound in Washington, USA, virtually delivered her lecture titled “Teaching Ancient Women Philosophers” on October 2, 2021. 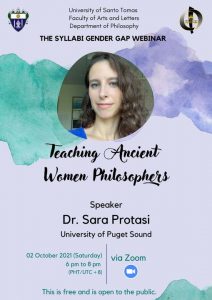 The event, which was open to the public, was organized as a contribution in addressing the perceived gender gap in Philosophy. Common in many contexts is the apparent presence of bias in Philosophy that discriminates against women as argued by existing literature and studies. As a response, the Syllabi Gender Gap Project will aim to re-introduce female philosophers in the discussions toward more inclusive Philosophy syllabi.

A “gender gap” is the disproportionate absence of women in a discipline or workforce, which can lead to an imbalance of rendition of rationalities and epistemologies that affects the climate of philosophical thinking.

This is perpetuated by the kind of knowledge fostered in the (virtual) classroom through the topics included in the syllabus that mostly underrepresents women. The syllabus, which envisions the kind of graduates an institution tries to mold, is instrumental in achieving learning outcomes for specific courses in the discipline and illustrates what discussions may foster in the classroom.

Organized with the first-year students of Philosophy, the webinar is a response to the call to pay attention to the syllabus and potentially address its gender gap. The first webinar of a series featured a speaker who discussed pedagogies and strategies in teaching ancient woman philosophers, a period dominated by the male superstars of the Greek world.

The Faculty of Arts and Letters Dean Prof. Marilu R. Madrunio, Ph.D., in her opening remarks, echoed the presence of the dominance of male personalities in the realm of Philosophy, recounting that patriarchy has aggravated the unfortunate conditions of women in society, such as exclusion from social and political life, and deprivation from opportunities, among others.

To support achieving a balance of male and female representation in Philosophy, Madrunio articulated the challenge to increase women presence in Philosophy by “speaking about the female philosophers’ important contributions and works to Philosophy and society.”

Dr. Sara Protasi, in her talk, showed that women also share in the development of Philosophy. Her discussion was anchored on her 2020 paper titled “Teaching Ancient Women Philosophers: A Case Study,” citing the methodological hurdles and pedagogical challenges she faced in teaching ancient woman philosophers.

Protasi addressed the question “how to best teach ancient women philosophers” and presented various strategies such as concept mapping, independent research, and creation of digital archives to approach the subject matter.

Assoc. Prof. Marella Ada M. Bolaños, Ph.D., a faculty member from the Department of Philosophy, and Mr. Carlo G. Cadiz, a first year Philosophy student, served as reactors. Both agreed with the importance of women representation in Philosophy. Bolaños further magnified the contributions of Filipino female philosophers in having a proportional representation of women in Philosophy, while Mr. Cadiz emphasized a point that he picked up from Dr. Protasi’s paper, which was to rediscover the forgotten women philosophers in the history of Philosophy.

The call is not to dominate the discipline; it is rather a call for proportional representation, for equity that yields to a certain degree of balance of rendition of rationalities, ontologies, and people. Such representation would lead to improving the climate in Philosophy, that men and women would flourish alongside each other.